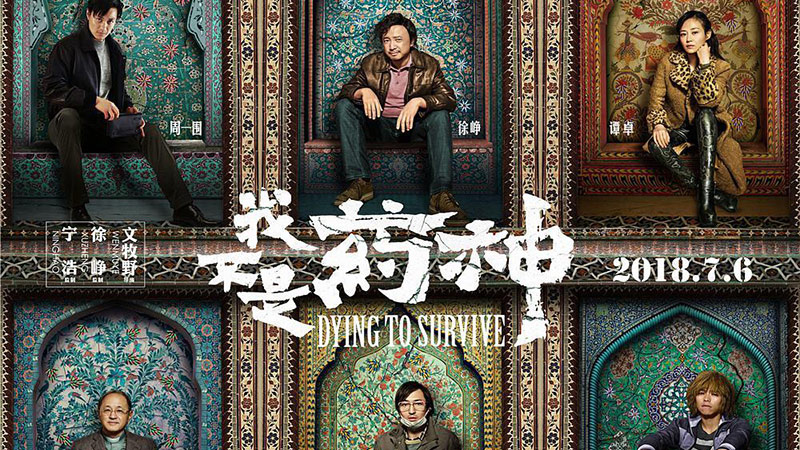 The life of Cheng Yong (Xu Zheng) who is  the owner of Shenoil, is shattered by an unexpected visit. He goes from a seller of male health care products who can't afford to pay his rent to being the sole agent of a generic drug called "Lenin" in India.He gained a huge profit, drastic changes in his life, dubbed the "god of medicine" title by  patients.But, a tug of war about redemption also slowly spread out in the dark swell of the waves.....

There are very few films about institutional issues and realistic issues, and some excellent ones have been banned in varying degrees.The screen is often filled with all kinds of anti-Japanese war films with no nutrition in the crotch, classical dramas with palace heart fighting strategies, and dog-blood love stories of overbearing executives.Dying To Survive will be a movie that cuts deep into our sensitive nerves.

Xu Zheng who  photographed  the spring scenery bright pig eight quit , after this TV series  , it is said that never touch in  drama filming, mostly focus on film career. He's one of the most successful transition from actor to the director in the film area .It is  believed that Dying to Survive will  be the most successful work  shot  by Xu Zheng after the  "Lost "series,,It must be very interesting.

The film is based on real people and things, but it's completely dramatized, and the immediate result of that dramatization is that the main character arcs: the character arcs are complete and Shining  with humanityThe character played by Xu Zheng changed from a passive helper for his own selfish interests to one who helps others at the expense of his own interests and completes the road of self-redemption. Every hesitation, choice and change he makes in the film is convincing.

"Dying to Survive" is a film with social significance, allowing the audience to have a profound understanding of leukemia patients and the survival status of the leukemia community.When cancer can take a life and destroy a family, there's a weight to making a film about it.