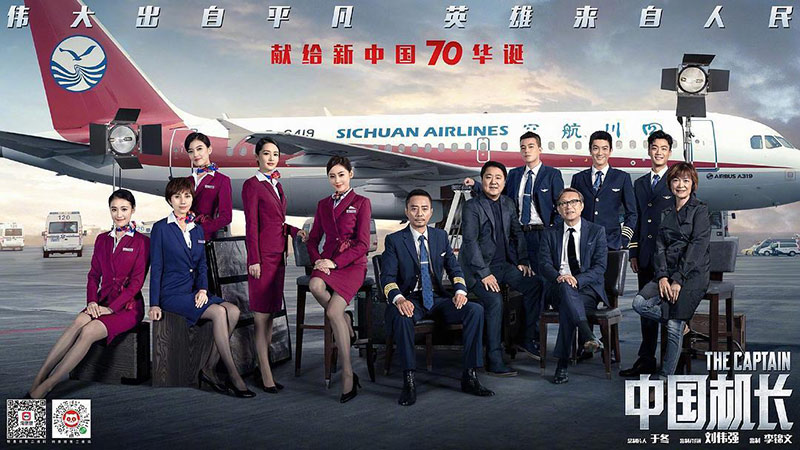 The crew of Sichuan Airlines Flight 3U8633 encountered an extremely rare danger when the cockpit windshield exploded and fell off and the cabin pressure was released at an altitude of 10,000 meters while performing the flight task.The crew struggled with manual control, with very few instruments still working.When cabin pressure release occurs, the cabin crew immediately implements the pressure release management procedure, instructs passengers to use oxygen masks, and calls out in a trained voice: "Please trust us, believe that we have the confidence and ability to lead you to the ground safely."The correct handling of the heroic crew ensured the safety of all on board and created a miracle in the history of world civil aviation.

Unlike most films based on real events, which have taken place over a long period of time, plans to bring this "world-class" diversion to the big screen were quickly put on track after it caught the world's attention.Director Liu Weiqiang said that when he saw the news, he was deeply moved by the strength and spirit of the heroic crew of China Civil Aviation to turn the tide. He said that The Captain is a big film with positive energy and showing the faces of Chinese civil aviation people. He also hoped to let the world know how great the Chinese people are through this film.

During the shooting, hundreds of professionals from various units of the civil aviation system participated in the creation and shooting of the film.The CAAC also authorized the filming of some scenes in Chengdu Shuangliu Airport, Chongqing Jiangbei Airport, Southwest Air Traffic Management Bureau of CAAC, and Gongga Airport in Lhasa.

Until now still we also remember of that kind of excitement of people when the incident happened, the plane is different from other means of transportation, once an accident happened  that no chances of survival, and ChuanHang events that all passengers landed safely let people in amazing pilot flying technology at the same time, the ground work closely with various units also let people see our aviation industry is booming.A year later, a film based on a true story was released, which was the perfect time and place for a national celebration